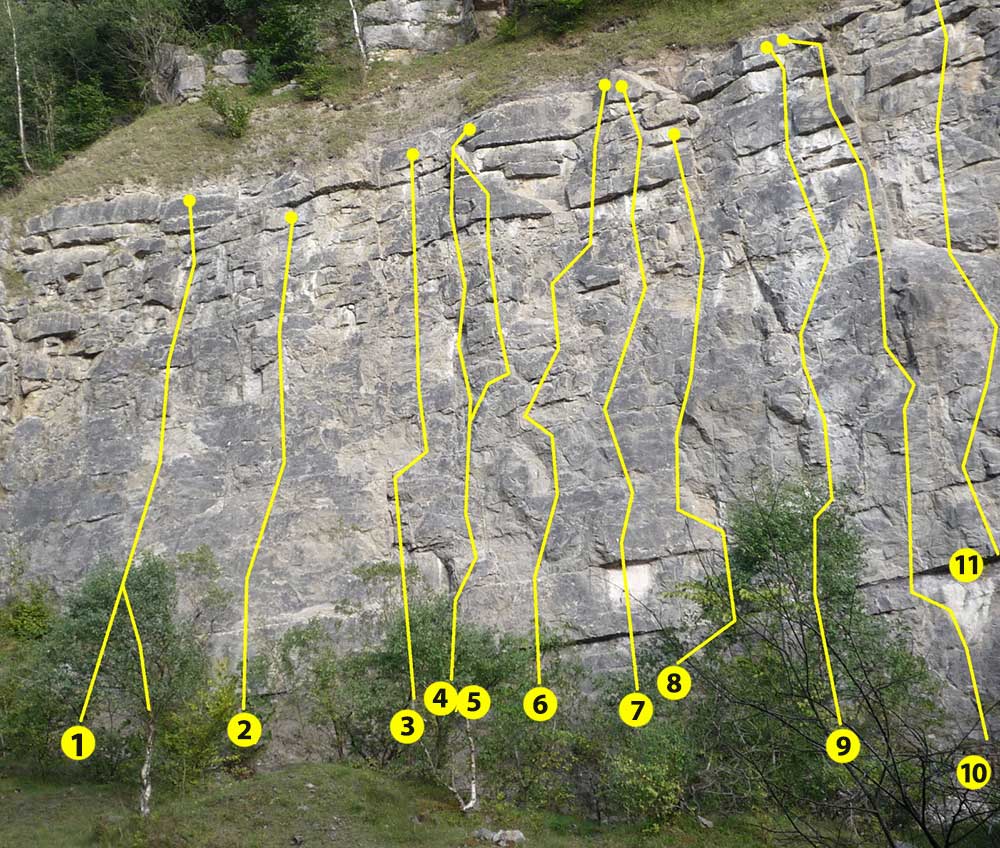 1. Brexit Stage Left (5b) 14m
Start up an easy groove to the left of both Yellow Peril and the first bolt (which can be reached). Continue to steeper ground with good holds. A harder variation start (6b) goes directly past the first bolt.

2. Yellow Peril (5c) 13m
Start on the left side of an earth/grass cone 4 metres left of The Urchin. Gain a good hold above the first ledge, then follow ribs and grooves.

3. The Urchin (6a) 15m
Quite good climbing up the recessed wall in the upper section. Start below a short crack just left of where the shale band runs into the earth bank. Pass a horizontal break to the crack. Climb the crack to a ledge and continue up the back wall of the shallow recess above. (Climbed and graded before the borehole/groove on the left was cleaned. I have since seen several people using holds on the left. It may be easier than 6a this way?)

5. With the Crowbar (6a+) 16m
A right hand variation to Professor Plumb up the crest of the rib. Follow Professor Plumb past its first two bolts to the top of the second borehole. Step right and climb the rib, steeply at first, passing the second ledge on In the Pandy. Easy ground leads past an overlap then there are airy moves back left to the Professor Plumb lower-off.

6. In the Pandy (6b) 18 m
Start about 2 m right of With the Crowbar. Gain a ledge, bridge the shallow scoop above and continue directly (Keep left of the 3rd bolt: an unused drill hole shows the line. The bolt is placed right of the line for the solidest rock) to a second ledge. Climb the wall on the right to a V-notch.

7. Pale and Interesting (6b+) 18m ★ Engaging and direct with good climbing. Start below a pale patch under an overlap. Climb through the pale patch and surmount the overlap to good holds. Make a tricky move to stand on the good holds and continue up the wall on mostly good holds but still with a couple of difficult moves.

8. The Needle 6b 16m
Start from the top of the grass cone just right of Pale and Interesting where the shale band has been cleared back to reveal a ledge. Gain the ledge easily and start in the corner to the right. Move up and left with difficulty, pass the needle (a threadable borehole: no need to thread it: there is a bolt) steeply and follow a weaving line of grooves and bulges.

9. Leete Entertainment 6a+ 19m
An interesting climb up the groove and wall between The Needle and Honorary Horseshoe. Start directly below the groove. Gain the groove via a cleaned ledge in the shale band. Get stood on the big hold on the right rib then climb the rib and short crack to a ledge. Start the upper wall on the left, move right then up the wall directly to a finishing groove just left of Honorary Horseshoe.

10. Honorary Horseshoe 6b 20m
Start below a rib with prominent overlaps at the top of the crag. Pass the shale band carefully moving slightly to the left (clip the first bolt early, a good layaway in the pale patch helps) and climb the steep, intricate wall just left of a crack (occasional holds on the right can be useful) to gain the upper rib. Follow this on its left side to a lower-off on the left. (Many people seem to shuffle left just above the slab. It is better to climb the arete all the way to the final break to add a neat move up the nose.)

11. Manhattan Project 6c 18m
The pillar and wall between Honorary Horseshoe and Colonel Mustard. Start just right of Honorary Horseshoe. From a good hold in the floor of the shale band climb the scoop and wall above past a half-height easing to a steep finish.

12. Colonel Mustard (6b+) 19m ★
Good, complex and interesting. Start up a narrow, brown, right-facing groove and continue fairly directly up grooves and bulges. 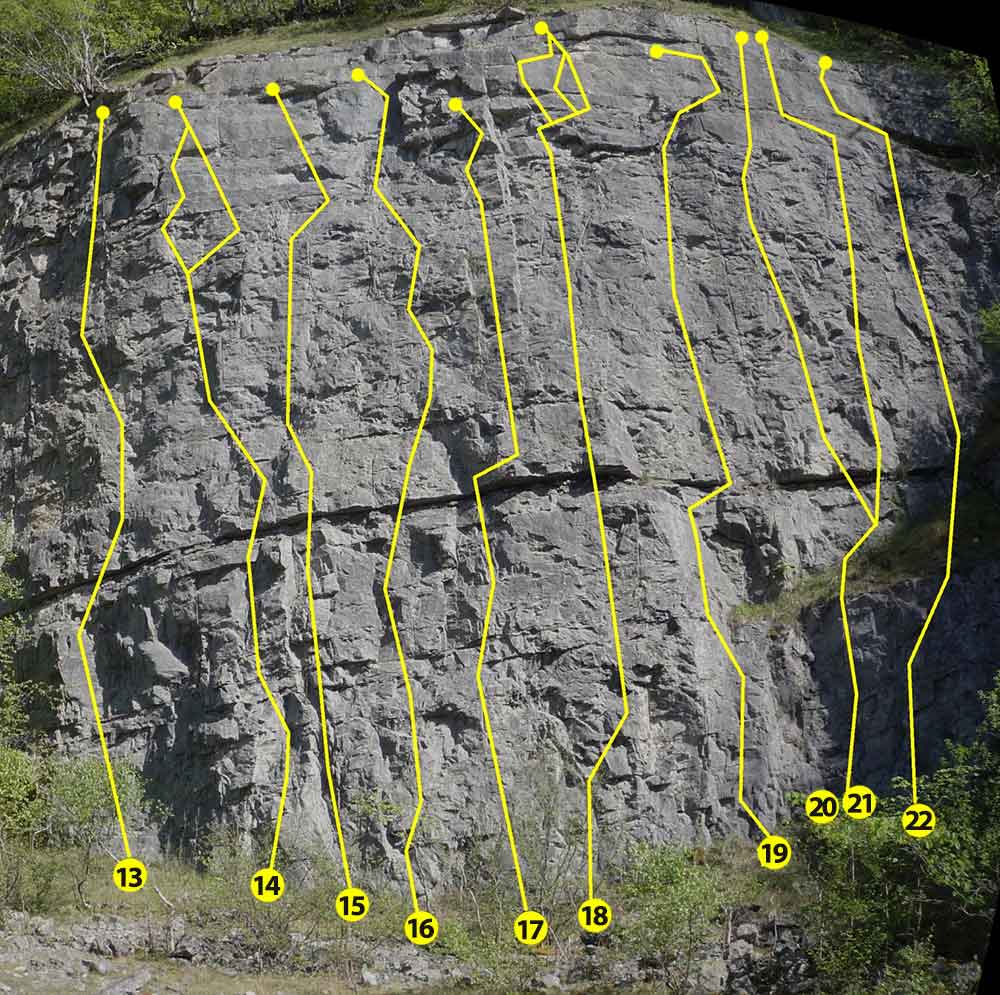 14. Alyn Wall (6b) 20m ★
An exciting route up the left trending seam. There are two alternatives from the sixth bolt: climb the left rib to a horizontal rail slightly right and finish direct or (slightly easier, not quite as good. reach right to jugs then trend up and back left.

15. Anghofiedig (6a+/6b) 21m ★
Slim grooves between Alyn Wall and Duelling Banjos lead to the shale band. Take the right side of the short rib above then climb the steep wall above on horizontals and good crimps to an easier finish.

16. Duelling Banjos (6a+) 22m ★
Start below a short left-facing corner at the top of the crag. Weave an intricate way up to it.

17. Hayabusa (6a+) 20m
The wall, overlap, groove and upper rib between Duelling Banjos and Mustard Gas.

18. Mustard Gas (6b+) 23m
Start below the most prominent part of the overlap above the shale band. Weave up to the overlap, pull through and continue to the base of a right-facing groove. Climb the right wall of the groove to the upper overlap, move right and pass the final bolt right, left or directly.

19. Marie Celeste (6b+) 21m ★
Start below the left end of the large grass ledge at 6m. Climb a shallow groove and pass left of the grass via the left wall of the continuation groove. Move right at its top using handholds above the overlap. Climb broken ground then press on up walls and shallow grooves. Exit right to stepped ledges.

20. Discovery (6b+/6c) 21m ★
A good route up a slight rib left of the upper wall of Secret Santa. Steep and more pumpy than most here. Follow Secret Santa to the grass ledge. Step on to the upper wall on the right, move left and climb the left side of the shallow rib, with the odd leftward excursion, on positive but sometimes small and well-disguised holds.

21. Secret Santa (6a+) 23m ★
Good positions. Start below a bolt under the left end of the large grass ledge. Climb the lower wall past the bolt or use the groove to the left. From the ledge climb the rib right of Discovery and trend further rightwards before moving back left on a thin break and up to finish.

22. Right Said Fred (6b) 22m
Start right of Secret Santa below a bolt in a slight rib in the lower wall. Climb the wall to the grass ledge and move up rightwards to rock ledges. Climb grooves and bulges almost to the top then step left on to a small ledge. Finish via holds in a ramp line. 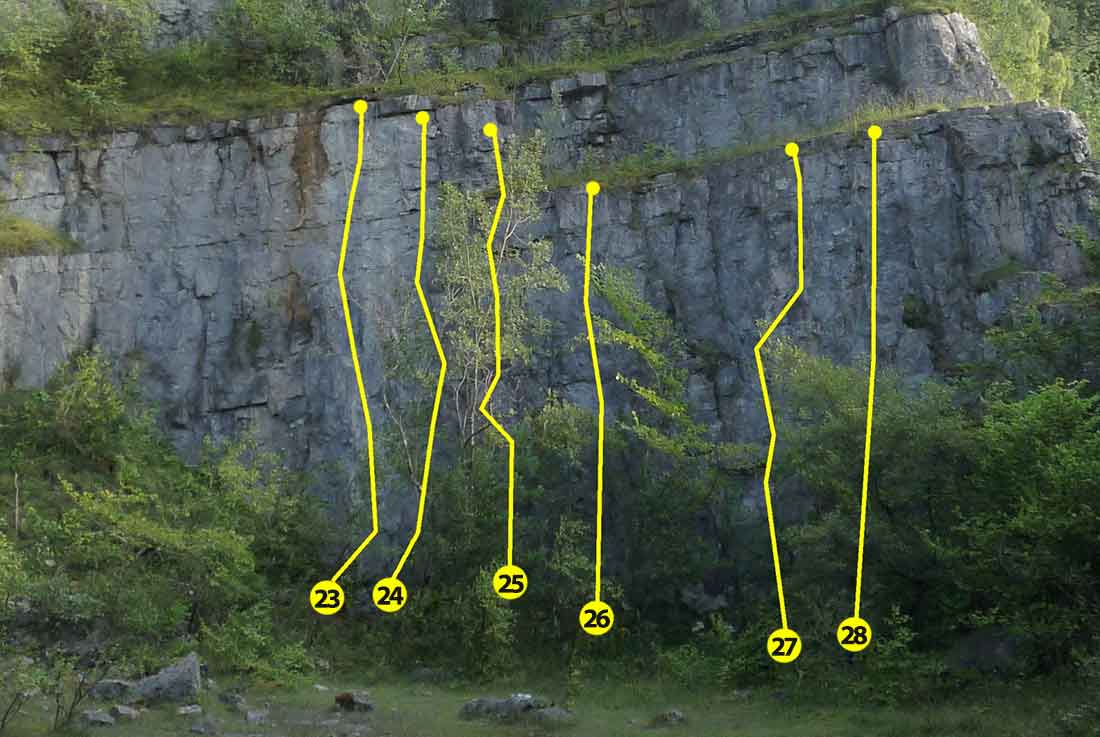 23. Seven Nation Army (6a+/6b) 12m
Quite interesting. The first white stripe right of the orange drainage streak. Gain the groove and climb it to good holds below the short, steep headwall. Finish via good but hard to spot crimps.

24. Dead Leaves and the Dirty Ground (6b) 12m
Climb the wall just right of Seven Nation Army with some difficulty to a ledge below a borehole/groove. Climb the groove and finish up the right edge of the headwall.

25. Over and Out (6a) 12m
The hairline crack and pod right of Dead Leaves. Climb the crack, pass a block to its left, continue up the pod or its left arete and surmount the left edge of the bulge to a lower-off above the ledge.

26. Silver Shadow (6b+) 11m
Good technical climbing up the smooth silvery grey pillar/wall right of Over and Out. Climb the centre of the pillar/wall directly finishing with a long reach and an awkward adjustment.

27. Darth Maul (6c+) 11m
Bouldery moves gain the centre of the initial overlap directly. If no clipstick, the right arete may be used to clip the first bolt but it is out of bounds for the climbing. Continue up the groove a short way and finish steeply to the right (pumpy).

28. The Crawling Eye, (6a+) 11m
A vague groove at the right end of the decent rock leads to a steep finish.