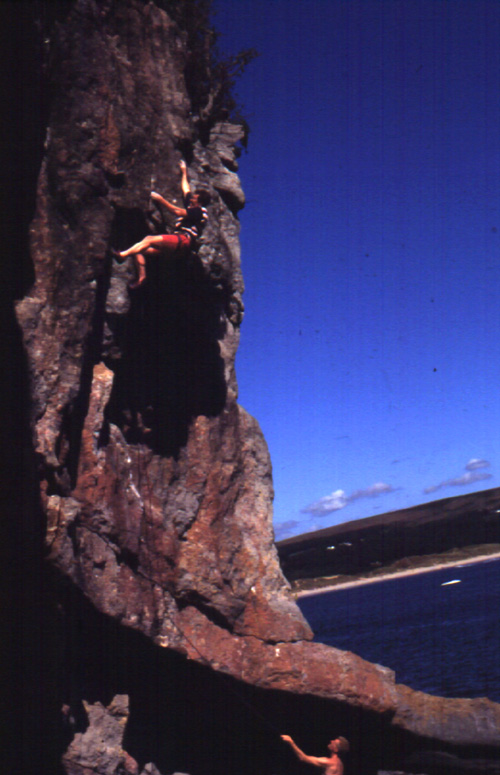 An incredible find in the heart of the Gower: a superb 15m wall springing from sea level and extending southwards for 400m. When we found this we were stunned to find that it had hardly any routes, save for the odd morsel from Adrian Berry, and had massive potential for sport climbing and little else. Months later and after the painstaking effort of equipping and cleaning routes over the winter months, the lines began to fall.

What now remains is one of the best cliffs in South Wales with incredible lines, perfect access and even swimming facilities within 20 yards of the cliff face!

The cliff consists of two main areas: the Sea (red) Walls, obvious by name provide an easily accessible wall direct from a sea level platform: ‘The crag in the woods’ lies beyond this with an area of woodland surrounding it and gently overhanging for most of its length with walls, grooves and aretes in abundance.

To reach the cliff locate the beach at Oxwich Bay (parking fee) and when the tide is down follow the right edge of the bay over a few rocky sections and in 400m the cliff is obvious: at high tide the same point can be reached with a higher line and the descent of a small rocky spit or via a path across the cliff top before a descent is made, hard to find, at the far end of the cliff.

To maintain access none of the information contained here must be published in any magazine article. The climbing is also strictly limited to the area described and the cliffs in the ‘ravine’ before the crag and those some way past it are not accessible for climbing.

Steep, overhanging and sustained! There are a few corner and arete lines but the majority of the climbing on edges and pockets is very intense for its length. Easier routes are few and far between and have little to recommend them.

The cliff takes quite a lot of seepage and doesn’t usually dry out until towards the middle or end of May, though in a long dry spell it can be earlier. The cliff only gets the sunshine until 11pm. and can have a few lines of seepage even into mid summer. The Sea Walls are great in hot weather but in humid weather the ‘crag in the woods’ can be midgy.