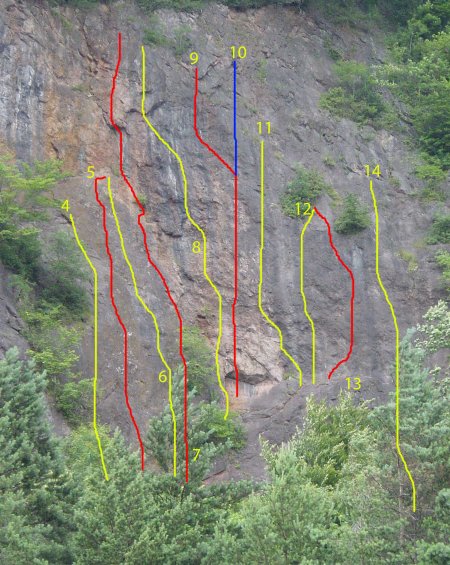 Three route lie to the left of the top of this:

Celestial Being (7b) ★★ the right-hand line gives a sustained exercise with technical moves low down and fingery ones high up.

5. Christendom (7a) ★ long sustained and finger wall with delicate crux and easier climbing above.

6. Angel of Mons (6c+) ★ perhaps slightly better to the right with a low technical crux and pleasant sustained climbing above.

7. Decimus Maximus (6b) ★★Again very pleasant climbing taking a rib and groove followed by an intricate slab. The continuation up the headwall above the belay gives:

Maximus Extensicus (6c) ★ the next group of routes are situated directly above the lower walls from belays atop its left-hand routes.

8. I'm Spartacus (7b+) ★★★ another magnificent route taking a snaking leftwards line up the black-streaked wall. Sustained and high in the grade with a frustrating finale.

9. Sugar Bullets (7b+) ★★★ superb sustained climbing culminating in an impressively situated crux with the final moves on the headwall. May be dusty.

11. Scram (7b) ★★ super-sustained face climbing with no single hard move but plenty of them.