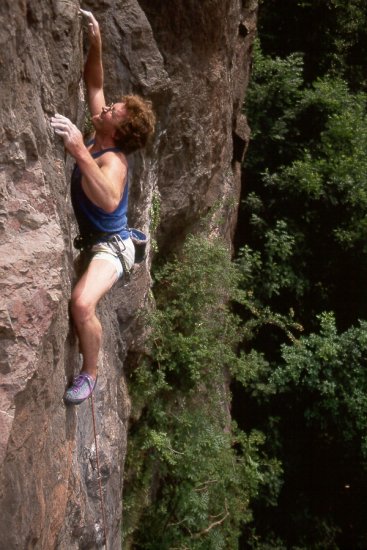 Since the production of the 1992 guidebook to the area by the SWMC, a number of crags, in conjunction with the BMC bolting policy, have received a face-lift. This has led to many of the routes being re-bolted with more substantial anchors, acquiring lower-off stations to help provide convenience and reduce the risk of damage to plant life above many of the crags as well as received a general cleaning up either by increased traffic or by sheer hard work. Subsequently, this has increased the popularity of many of the cliffs as well as stimulating a whole host of new routes throughout the grading spectrum.

Such activity has not gone unnoticed and it has been felt necessary to update the areas information technology by a series of topo guides including the best sandstone and limestone crags: these are available as South Wales Sports Climbs.

The intentions of the topo’s are twofold: firstly to introduce the climbers to the cliffs harbouring many of the areas best ‘sports’ routes with quick and easily-accessible information and secondly to help provide some form of remuneration, not matter how small, for the climbers who have been active in re-equipping the routes as well as providing the new routes.

Below will be found a list of the sandstone crags including with some update information and a taster with what is best about the crags. The information is not complete so please contribute to the ‘bolt-fund’ by buying the topos and helping maintain a healthy environment for future gear replacement.