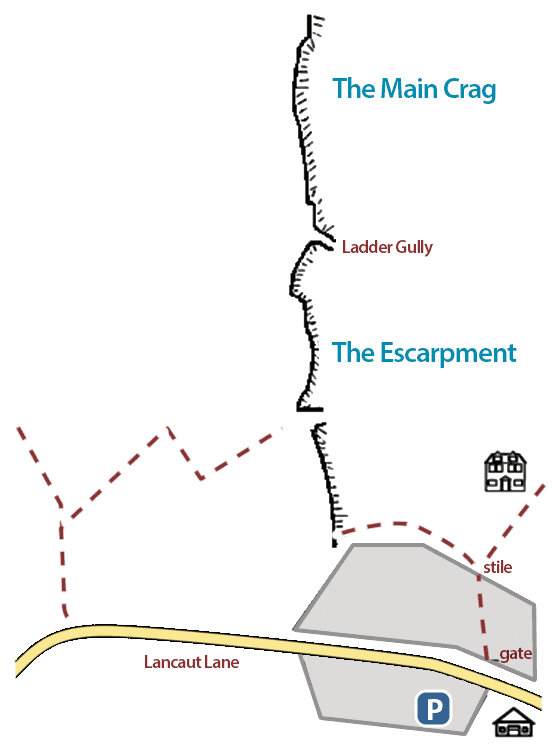 Once you have been deposited at the foot of the crag it consists of two main sections: the Escarpment, a long 12m high crag with numerous overhangs and bulges which is terminated by a gully at its left-hand side complete with a set of ladders.

The Main Crag lies to the left of this and is in itself composed of four tiers of which the bottom two merge to give the climbing.

The path below the escarpment is easily followed with little vegetation underfoot. Once the Crawl Buttress is reached this gives a difficult passage onto its left-hand side via a vague terrace and then on into the Ladder Gully and the Main Crag beyond.

The Main Crag is easily traversed below up until spring time when a large degree of vegetation can lie below the face. With popularity and the eventual rebolting of the crag this will not be a problem (?!)

As is clear the main crag consists of a cliff composed of four tiers the bottom two of which form the area of climbing so described. The terrace above these ‘merged’ tiers is densely vegetated which has led to the majority of routes being equipped with lower-offs. In an effort to popularized the crag most of the routes again posses some form of fixed protection (mostly bolts) and in a lot of cases are complete sport routes. For the remaining routes it is necessary to carry some form of natural protection: small and medium wires plus Friends but it is important to stress that this situation is under review with the intention of equipping even the easiest routes with fixed protection.

The Escarpment is in a similar stage of flux although the majority of routes do carry some form of fixed protection. Again this situation will be under review once the Foot and Mouth epidemic has ceased.

The Main Crag is a peculiar cliff in that it takes very little seepage during the winter months and dries very quickly after rain. Its northwest facing nature, together with its setting in a relatively sheltered valley, also make it a very pleasant place to climb. The Escarpment does suffer seepage problems in the winter but once dry, give it roughly a week, will stay dry in the rain if required.