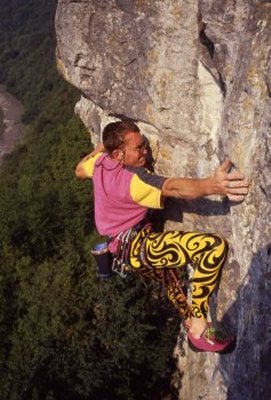 The history of the climbing at Ban-y-Gor is a very interesting and unusual one since it was probably the last of all the major crags in the Wye Valley to receive any wholesale attack until the late Eighties.

Before this period only sketchy details remain of the goings on but records and anecdotes give tale of some interesting happenings. In the late Sixties and early Seventies both Clive Horsfield and Frank Cannings, operating separately, paid visits to the crag and traced lines up the entire main crag eventually emerging into the gardens of the houses lining the rim of the cliff. Such a scene with the gardener tending his own lawn as a climber bushwhacks through his privet hedge on the edge of the garden can’t help but fire the imagination and a sense of irony.

Things then lay quiet until in the late Eighties the ubiquitous Matt Ward from nearby Chepstow stumbled, like a handful had previously, upon the hidden section of cliff tucked away in the trees to the right of the Main Cliff. The word was out amongst only a select pigade of locals and the poor summer of 1988 was turned into great use as the Escarpment became littered with a plethora of routes mainly in the modern idiom thanks to the likes of Ward, Gordon Jenkin, Martin Crocker and Rob Kingston. Their eye was also attracted to the main crag but its dense vegetation kept them clear. It needed a very dedicated person. 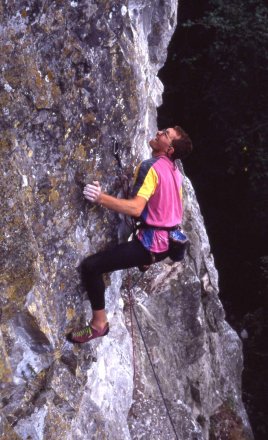 That man came in the form of Gary Gibson who had been allowed into ‘the secret’ late in 1988. After a pief visit to the crag and a major accident whilst cleaning on the fringes of the Main Cliff in the November, all hell was let loose as many an hour was spent cleaning and drilling to ping it up to modern day standards. The routes created, with the help and encouragement of Doug Kerr and Roy Thomas, have given rise to a number of impressive routes which merit the attentions of the climbing public.

Although covered elsewhere in an existing guidebook, there is every reason for including this superb cliff on these web pages due to the ever changing nature of the cliff and its climbs.

Situated in the Wye Valley, only a stones throw from Wintour’s Leap, this cliff has achieved enough popularity to merit its independence as a a premier sport crag. Admittedly not every routes is of that style but for the most part the routes have some if not all fixed protection(This is current under review with the whole crag about to be rebolted).