An excellent wall since the regearing has taken place. It provides a number of good wall test-pieces with the odd bulge thrown in for good measure. It takes very little seepage, can stay dry in light rain depending on the wind direction. It also faces north and is an ideal hot weather venue.

From the southern end of Water-cum-Jolly, follow the path through Cressbrook Mill until just before Rubicon Wall. Cross the bridge at the foot of the pool, go through a gate and up a series of rock steps. Once atop these, turn immediately right and follow the cliff-top path for approximately five minutes until it descends just after crossing a fence. Twenty metres after crossing the fence, take a path that drops down abruptly until below the line of cliffs - as for Majorca Buttress and Crunch Buttress. Follow this back rightwards to the waters edge and Moat Buttress.

The crag faces north west and gets little sun. In the summer it comes into the sun briefly in the evening but the high sides of valley mean this period is fairly short. It stays dry in the rain and doesn’t seep much meaning it can usually be climbed on late in the season.' 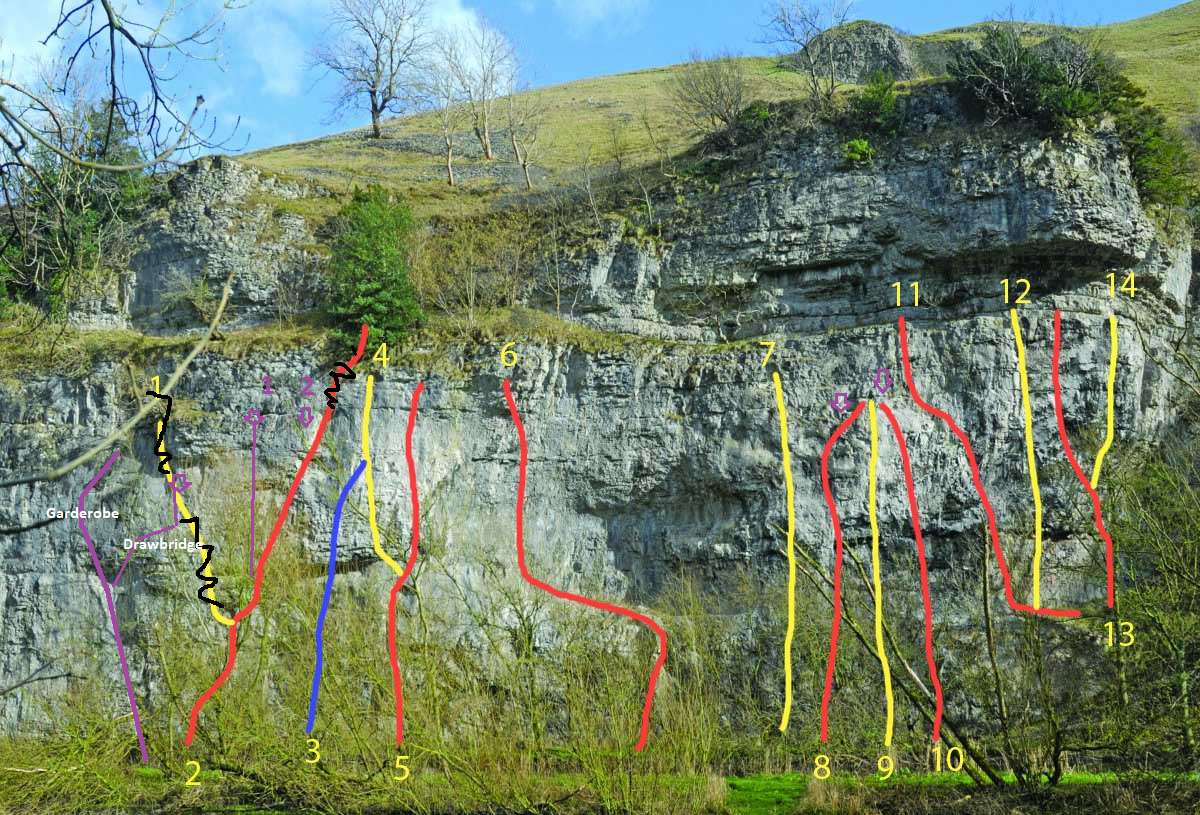 At the left end of the crag there are several routes that sometimes start below water line though recent work means you can usually start from dry land. If the starts are submerged a line of bolts at around 3m can be used to protect a traverse out to the start of the routes.

Dam It (7a) ★ A fine route of contrasting halves. From the end of the horizontal line of bolts climb up and move leftwards up a vague ramp. At the break move up, clip a bolt and traverse left. Move back right at a higher level and climb the blank wall to easier ground. Belay off to the right.

Lady of the Lake (7b) ★ start up Dam it but climb directly up via a bulge to the top.

The next two routes climb the shallow groove.

Garderobe (7b+) ★★ climb the groove to the overlap. Move L on undercuts and make hard moves on big sidepulls through the bulge. Make a difficult move L then up and R to the belay.

Drawbridge Down When the Levee breaks (7c) ★ climbs a shallow groove and bulge above. Easier for the tall.

1. King Arthritis (7b+) ★★ climb Exalibur to where it moves R into the flake and climb direct up the wall instead (more direct than the topo indicates).

2. Excalibur 7b+ ★★ a classic of its era takes the impressive diagonal flake system rightwards. The first bolt hangar may be missing but it’s not too hard to climb up to the second.

3. No Mud, No Thud (7b+) ★★ a superb pitch trending rightwards via a shallow groove line right of Excalibur via a powerful bulge.

Moaty McMoatface (8b) climbs the wall between No Mud and A Bigger Splat to join and finish up the latter route a short way above the break.

A Bigger Splat (7a) climbs the short groove to escape out R.

4. A Bigger Thud (7c) ★ climb the groove above route and make a step left and climb the difficult wall above.

5. Let the Tripe Increase (7c) ★★ the logical direct version of the groove with a tough crux bulge and steep wall.

Over the Moorhens (7b+) ★ to the R of the groove of A Bigger Splat climb the boulder problem to the ledge then the wall above.

Lemmy At It (7b+) another bouldery route that you can finish at the ledge or up the next route.

6. All Hands to the Pump (7c+) a short groove leads to a belay ledge. The wall above is mean and very fingery.

7. Moatorhead (7b+) ★ a good sustained wall pitch with a welcome rest ledge.

Airhead (7c) ★★ links the next route from the 5th bolt to the finish up Moatorhead.

8. Coming up for Air (7c) a tough pitch that seems to veer to close to the next route. Now has an independent belay separate from 9 & 10

9. Moat People (7b+) ★★ a sustained and excellent wall pitch with difficulties until almost the last move.

10. Afloat in the Moat (6c+) ★ the right-hand line via a faint groove and slab leading leftwards.

Castaway (6c) climb the line of holds to the R of a hard to clip first bolt and follow the bolts to a belay below the roof.

MoaterGoat (6b+ / 7a) Start as for Castaway to the ledge. Move R and clip a bolt below the overlap. Climb up into the groove above, move L to reach the ledge. Grade depends on the exact line taken.

12. Triton E3 5c another trad. route via the shallow groove. 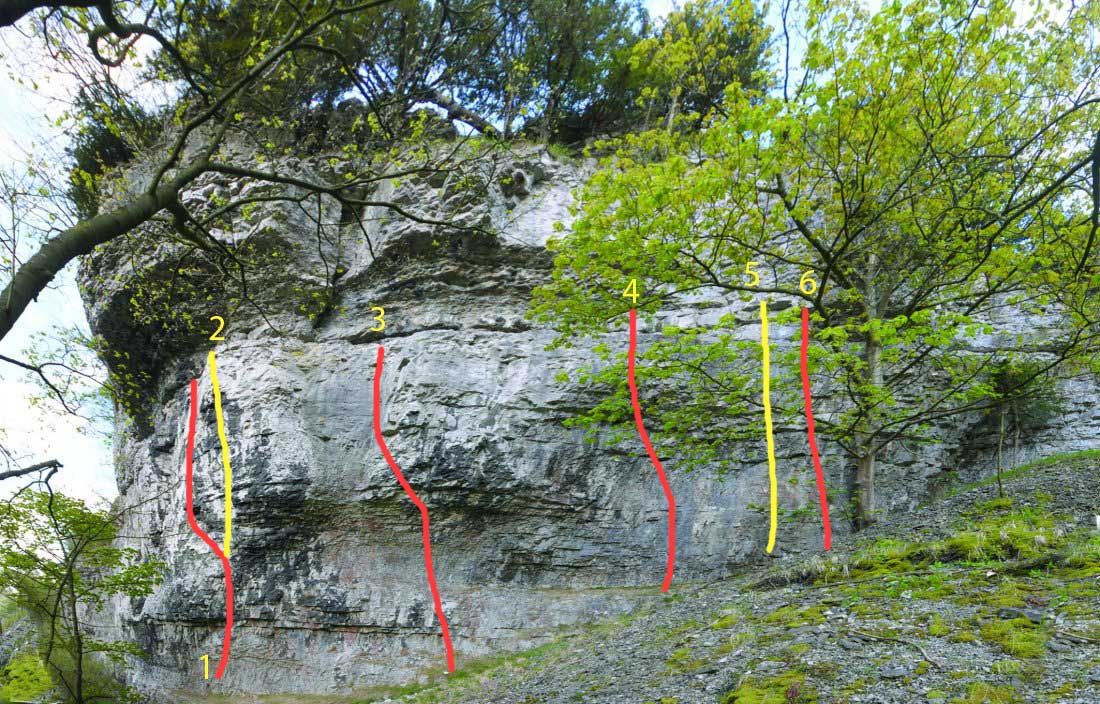 1. Two Sheep to Leicester (7a+) ★ leftwards through the hollow bulge onto the fingery white wall.

2. Searching for the Yeti (7b+) ★ the direct line above the start of Two Sheep gives a tough test piece.

3. Moat Wall (7b+) desperate through the lower bulge, only easier once in the groove. New bolts.

6. Castle Pudding E3 6a the bulge just left of the tree and littered with pegs.