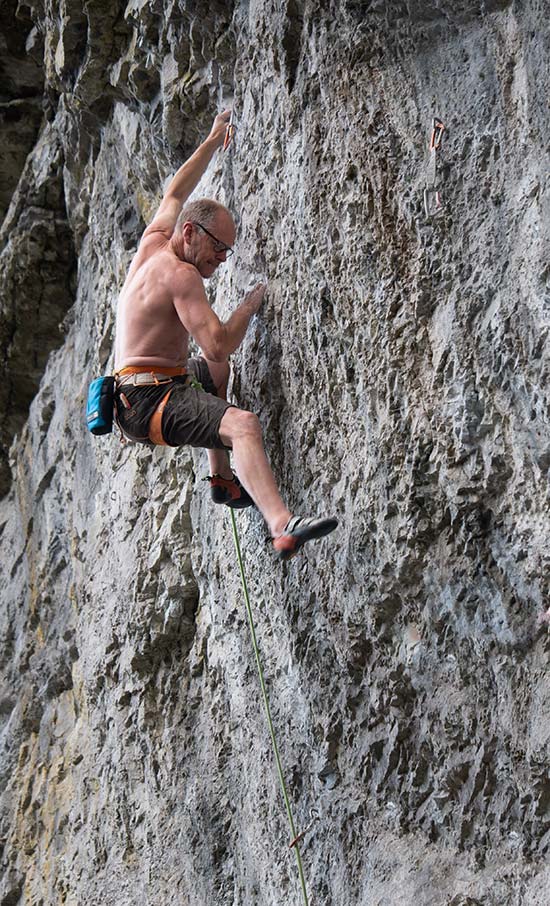 As with other Peak limestone valleys the first use of bolts in Water Cum Jolly was for aid only and whilst Tom Proctor's free ascent of Rubicon in the 1970's was effectively a sport route as it used old aid pegs for protection it was not until the mid-eighties that bolts were intentionally placed to protect free climbs. At first they were few and far between though always on landmark routes. Kudos/Hot Fun Closing had a then controversial bolt placed at the start whilst Tony Ryan's Caviar and Ben Moon's Zeke the Freak pushed the standards of the day in the Peak. Inch Test at the Upper Circle from Simon Nadin, though overlooked for years, was again a nudging of difficulty ever upwards. Most dramatic in the late eighties and early nineties was the development of the wild overhanging Cornice. Tim Freeman's Brachaiation Dance though peg protected was the ground breaking sport route of it's time and there on in there was a steady development of classic and almost totally bolted routes at the crag.

Meantime at Rubicon an escalation in bolting culminated in John Welford's The Bastard - again ignored for years but now given the respect it was due at the time - one repeat in 25 years !! Moat Buttress emerged from the waters in the late eighties and produced a crop of routes followed by a later reboot in recent years putting it firmly on the map for sport climbers. In the last decade Seb Grieve then Gary Gibson took the bull by the horns and started filling the gaps at Central Buttress which is now, in essence, a sport climbing crag. Kristian Clemmow reassessed then bolted Lammergeyer Buttress to give a set of short hard routes you either love or hate... Bolting continued apace at Rubicion and other small buttresses in recent years and the emphasis on climbing in the dale is now primarily sport.