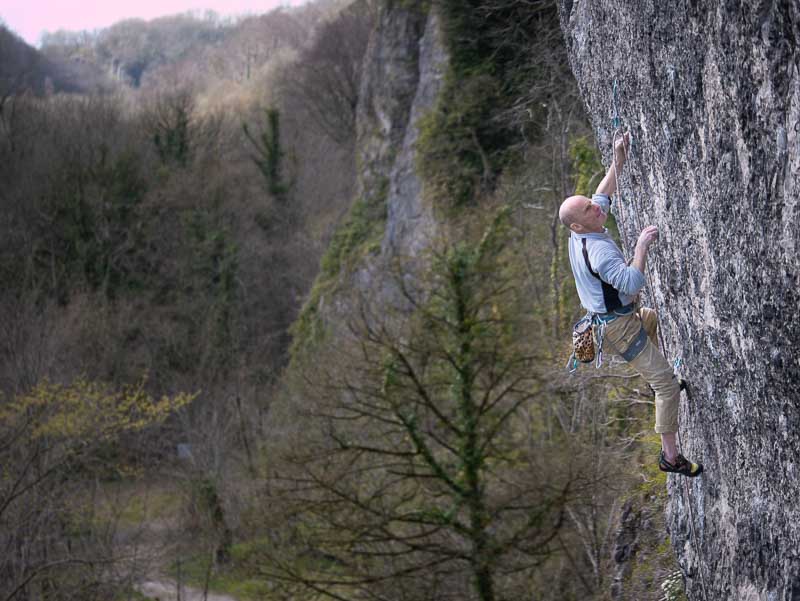 Although bolts had been used to equip aid routes on Garage Buttress in the 50's and 60's it seems that the first bolts placed for protection only were those on the crux of Little Plum (by Tom Proctor when he made a serious attempt to free the start in the early 80s) and on the crux of Circe by Geoff Birtles around the same time. Ozone Bozo in 1989 by Paul Mitchell was a mixed peg and bolt route and perhaps the first climb at Stoney that could be called a sport route.

In the mid eighties the Horseshoe sport climbing 'boom' began. Initially the work of Ian French, Chris Wright and Steve France, it was unsurprisingly, Gary Gibson who took the helm and turned a singularly uninspiring quarry into one of the most popular sport climbing venues in the Peak District. By 2010 development at Horseshoe had slowed to a trickle but down the road at Garage Buttress Mark Pretty and Kristian Clemmow were creating glued 'masterpieces' such as King of Ming (which superseded Andy Pollit's semi-bolted route of 1984, Virgin on the Ridiculous), Big Apple and Tollbar. Gibson soon joined the action and produced some excellent long pitches at the right hand end of the crag amongst many others. An old Mitchell project gave Mark Pretty Kinky but it was the out of vogue Stoney West that gave the next rash of routes. Gibson again, after a monumental ivy stripping campaign, produced another crop of popular sport routes (those at the nearby Golden Wall have proved less so).

Meantime the end of quarrying on the south side of the dale gave Paul Freeman the opportunity to climb several excellent routes on the prominent arete of Sit Down Buttress. Gibson bagged more good routes on Goddard's Crustation Wall plus intimidating lines on the big walls to the right. Sunshine Walls provided Freeman with six fine routes while Gibson popped up at Horsethief Quarry which is now a popular beginner's crag. The late great John Allen stole a march on Gibson and Freeman when he cleaned and equipped the Main Wall at Darlton 2 - now a very popular venue. Along with Nick Taylor he then went on to climb dozens of routes of varying quality at Goddard's. At Darlton Gibson had climbed an excellent clutch of routes at the back of the quarry with later editions on other buttresses from Paul Freeman and John Allen.

The big find in 2018 was the hole in the ground that is Deep Rake. A dozen excellent routes on unusual rock were the work of Lucian Cottle and Dominic Lee. More conteniously Pretty bolted several routes on Racial Harmony buttress in 2020 and Clemmow bolted a direct fininsh to Circe in 2021.