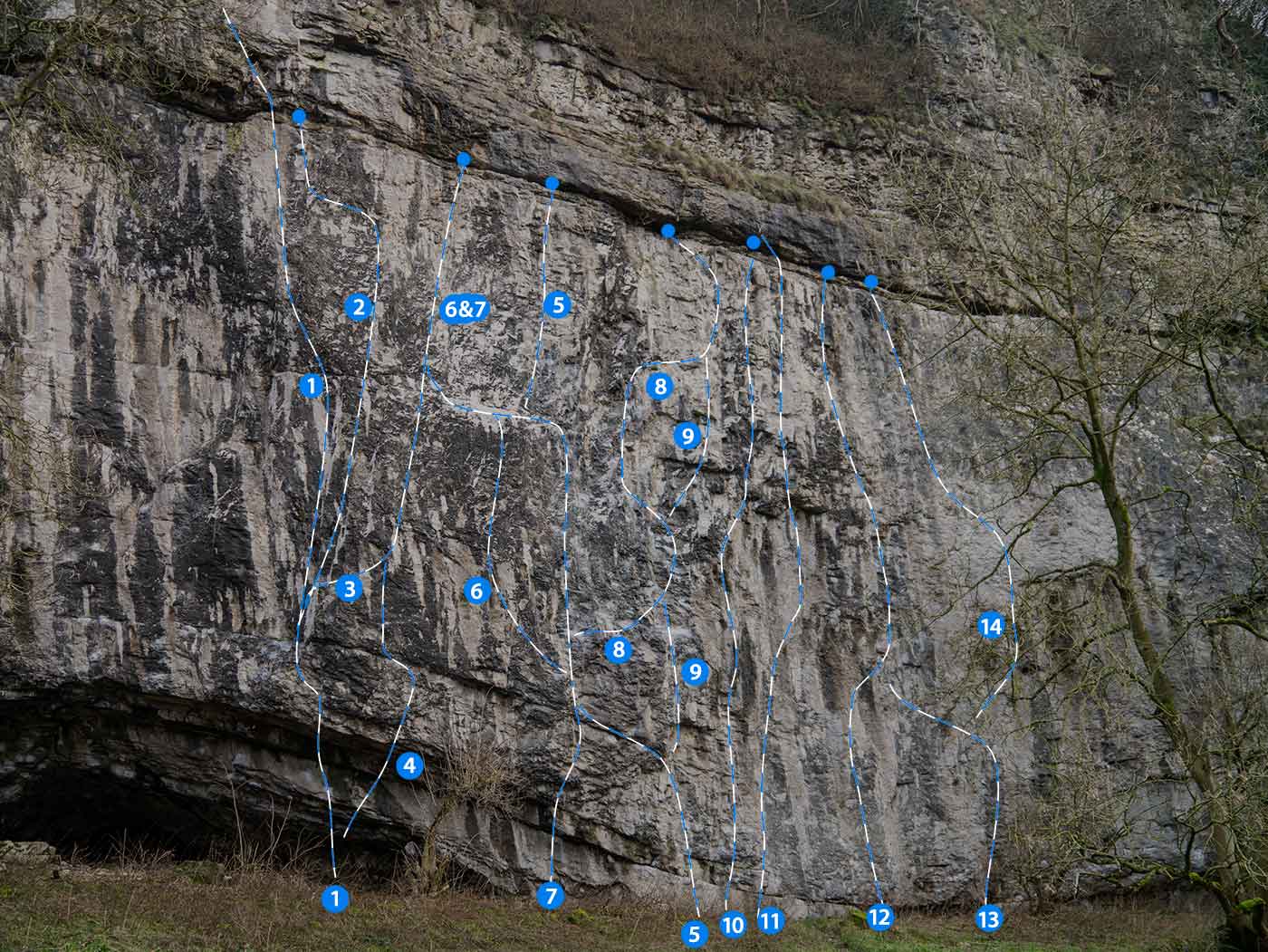 1. Fowl Play (8a) ★ Climb Weedkiller to the belay then continue up a faint groove to gain a break. Crumbly rock leads to a large flake and a small ledge at the girdle break (this section is pitch 2 of Rooster Booster 7b+). Pull up and left around an overlap to easier climbing and a belay on a ledge at the top of the crag. F.A. Mark Pretty 2004

2. Missing Link (8a) ★ Climb Weedkiller then take the shallow groove on the right to a break. Thin moves up the wall above lead to an escape left to the small ledge on Fowl Play. Finish here.
F.A. Mark Pretty 2007

Let’s Get Naked (8a) ★
Follow Missing Link to the faint break about 6m below the top. Traverse R and finish up Bullet the Blue Sky.
F.A. Ben Masterson 1987

3. The Exterminator (8a+) ★ Climb Weedkiller up to it’s belay then swing out right and climb the wall on excruciating holds to a faint break. Easier climbing leads to a belay at the girdle break. May be harder due to hold loss.
F.A. Mark Pretty 2007

4. Rooster Crossing (8c) ★ The bulging wall right of Weedkiller is desperate. From the junction with Rooster Booster pitch one pull up and left into Exterminator. Up this to finish.
F.A. Steve McClure 2007

5. Tin Of (7b) ★★ Start below the righthand end of the obvious horizontal break at 4m. Climb up to the break and traverse left with difficulty to gain better hold above the break. Continue up the wall via a shallow groove until a short traverse left along a faint break is possible. The finishing wall is complex and pumpy.
F.A. Steve Lewis 1988

6. Crumblefish (8a) Follow Tin Of to the second bolt then swing out leftwards to make hard and very reachy moves up the wall to join the faint break on Tin Of. Finish up this or Bullet the Blue Sky. Poor rock quality.
F.A. Malcolm Taylor 1995

7. Bullet the Blue Sky (7b) ★ A direct start to Tin Of is fierce and unbolted. Follow Tin Of to the traverse left but continue until a faint scoop (junction with Exterminator). Up this to finish. F.A. Pete Oxley 1987

The Grand Tour (7b+) ★ follows Bullet the Blue Sky to the faint scoop but then traverses left into Missing Link and then on and up the final section of Fowl Play.
F.A. Mark Pretty 200?

8. Sardine (7b) ★ The once classic line but now terribly polished weaves it’s way up the wall. Follow Tin Of to the third bolt and gain a traverse line back right. The original line traverses to the end of the jugs then moves up. A newer slightly easier way move up off the traverse halfway along. Above move slightly leftwards then back right and up to the finishing break. A direct start and finish are possible.
F.A. Ron Fawcett 1981

9. Another Toadside Attraction (7c) ★ Start as for Tin Of but climb direct with difficulty to join Sardine at the original crux. Do this then move up and right to an overlap. Over this to easier climbing and a junction with Sardine. Finish up this.
F.A. Steve Lewis 1984

10. In Brine (8a+) ★ Climb the wall right of the start of Tin Of and up faint groove to thin moves below a small roof. Climb the wall above to finish.
F.A. Steve Lewis 1987

Tomato Sauce (7b+) starts up In Brine but breaks out left to join Sardine midway through it’s original crux. Finish up Toadside. F.A. Steve Lewis 1988

11. Obscene Gesture (7c) ★ The wall right again leads to a small finger jug. Two options are possible. Either direct via a mono undercut (the original way) or slightly left and up to an overlap. Easier climbing leads to the top.
F.A. Dominic Lee 1982 climbed as a trad route via a different line

12. Obscene Toilet (7c) ★★ To the right is a faint flake. Follow this and continue to the small finger jug on Obscene Gesture. Move right into The Toilet and finish up this.
F.A. Mark Pretty 2009

13. The Toilet (8a) ★ Right again is a short groove. Up this then make increasingly difficult moves up and left to gain a large sidepull (junction with Obscene Toilet). Big powerful moves lead to an undercut flake and a jug. From here move up and slightly left to easier climbing and the belay.
F.A. Steve Lewis 1988

14. The Call of Nature (8a) ★★ Start as for The Toilet but move up and right with difficulty to gain sidepulls. A couple of hard moves lead to easier climbing on the slabbier upper wall.
F.A. Mark Pretty 2009