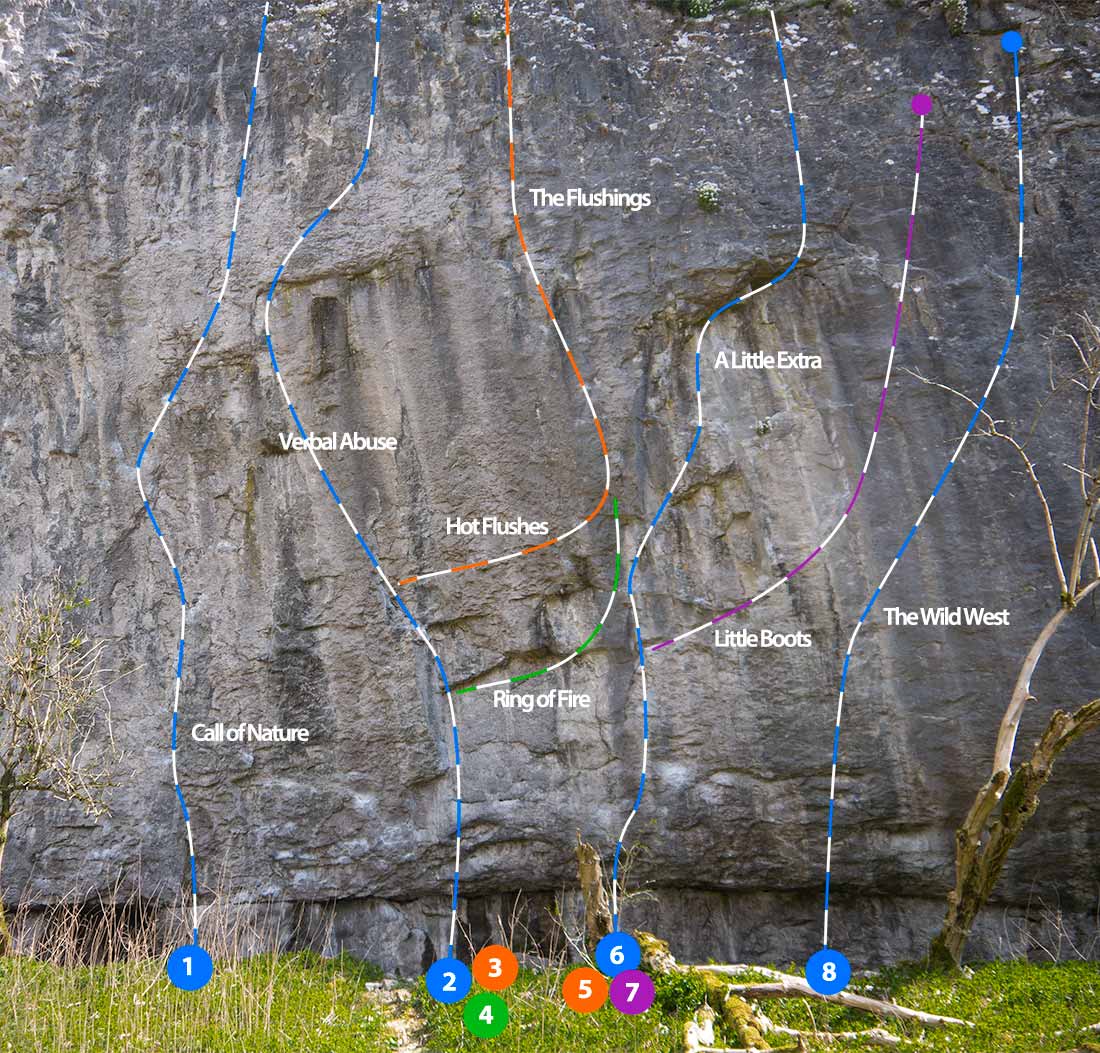 1. The Call of Nature (8a) ★★
Climb a vague short groove then move up and right with difficulty to gain sidepulls. A couple of hard moves lead to easier climbing on the slabbier upper wall. A popular route.
F.A. Mark Pretty 2009

2. Verbal Abuse (7c+) ★★
The shallow groove and flake right of Call of Nature lead to a bouldery section to gain an overlap. Pull over this rightwards and continue more easily.
F.A Jerry Moffatt 1984

3. Hot Flushes (8a) ★
As for Verbal Abuse to the top of the flake then make difficult moves right to join The Flushings. Finish up this.
F.A. Mark Pretty 1994

4. Ring of Fire (7c+) ★
As for Verbal Abuse but almost immediately traverse right on undercuts before awkward layback moves lead to a junction with The Flushings. Finish up this.
F.A. Kristian 2011

5. The Flushings (7b+) ★
As for A Little Extra to a shallow groove. Swing out left and scrabble frantically up the wall above.
F.A. Malcolm Taylor 1989

6. A Little Extra (7b) ★
To the right of Verbal Abuse start is a prominent jug at 3m. Start on a boulder and make a jump for the jug. Continue with difficulty to a large undercut flake. Traverse right and up to easier ground.
F.A. Tom Proctor 1979

7. Little Boots (7b+) ★
Start up Little Extra to the large jug then move R and up the thin wall to join Boot Boys at the belay.
F.A. Kristian Clemmow 2013?

Cream Tea Special (7b+) ★
Start as for Little Boots but continue traversing with difficulty to join Out of My Tree. Finish up this.
F.A. Mark Pretty 1995

8. The Wild West (8c+) ★
The bulging wall to the right of A Little Extra followed by the thin wall above moving rightwards to join Hooligan gives this rarely repeated route.
F.A. Dawid Skoczylas 2016