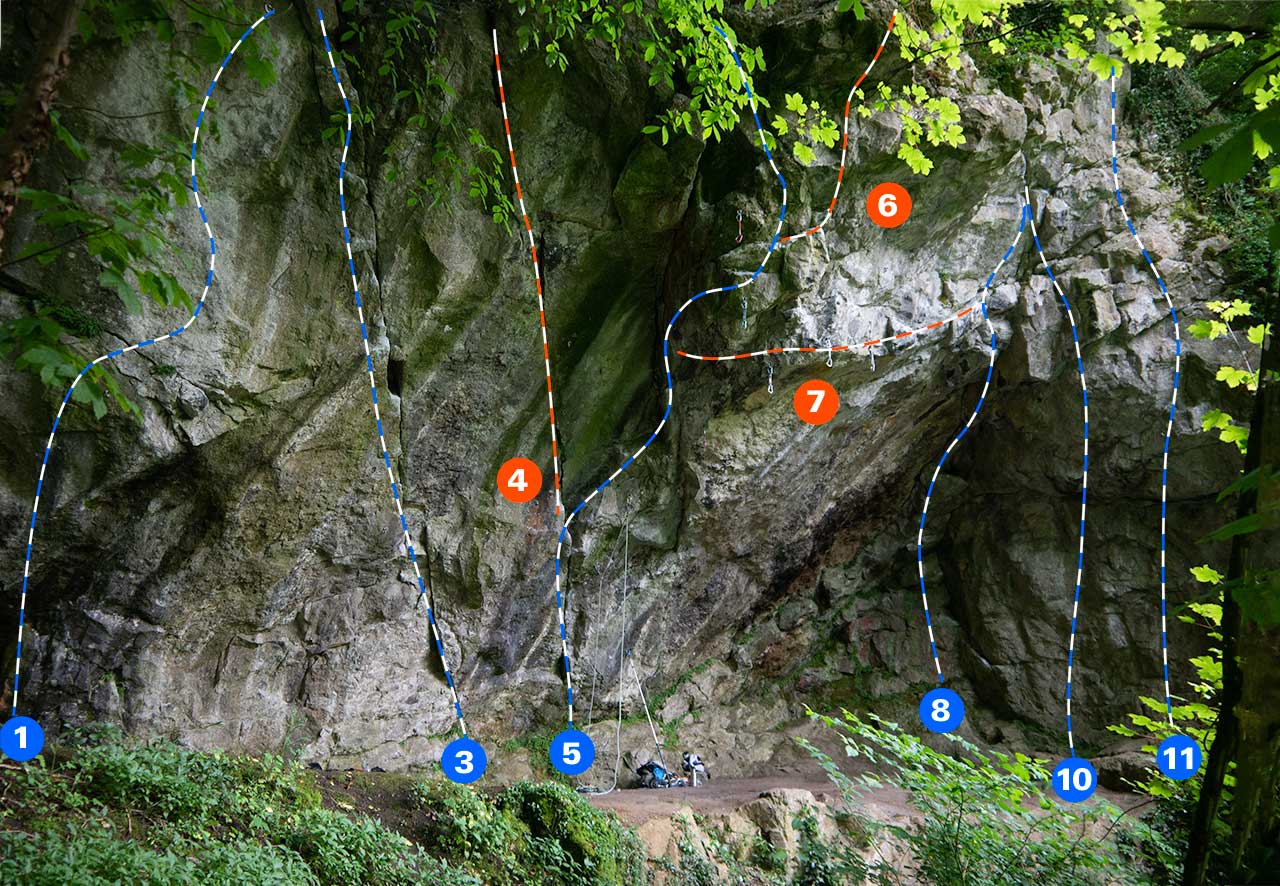 The routes are described from left to right.

2. Back to the Future (7c+) ★★A diagonal line starting a the previous route. Climb into Step On It at the halfway jug, move R again into The Land that Time Forgot and finish up that. Line not marked

3. Step On It (7c+) ★★★ A superb and relentlessly powerful crack climb with a fingery boulder problem start and a very tricky section on the upper half. Re-climbed since loss of a hold. Not to be missed!

4. The Land That Time Forgot (7c) ★★ A similar but slightly easier crack with the crux at half height and a reachy finale on good holds. Starts up the obvious overhanging finger crack.

5. Animal Antics (7b) ★★ The overhanging corner gives an enjoyable route, once dry. Start up the previous route then break out right up the steep groove. From the huge jug move out R onto a large flat hold. Either go straight up from here to the belay or move further on jugs and move back up and L to the belay.

6. Pedal To The Metal (7b+) ★★ A variation finish to Animal Antics, giving a better and harder climb. Climb that route to the jug in the groove then launch out rightwards onto the front of the overhanging prow to a large horn. Climb straight up in a great position over the overhang above. The belay may be missing.

7. Onslaught (7c+/8a) ★★★ A brilliant line taking a rising traverse line across the lip of the roof to the belay on Unleashed. Climb the groove of Animal Antics and follow the line of bolts rightwards starting with desperate and committing moves around the bulging arête. A series of long reaches follow to finish at the top of the next route. The longest route on the crag and very sustained.

8. Unleashed (7c) ★★ A steep route up another overhanging corner but with an easier start. Don't relax too soon because awkward and powerful moves soon follow to cross the roof and gain the upper wall.

9. Overkill (8a) ★A link up that climbs up Unleashed to the jugs then reverses Onslaught and finishes up Animal Antics. Line not marked

10. Annihilator (7c+) ★ A deceptively difficult route with a complicated crux sequence. Starting below the bulging wall, climb up leftwards initially. Then make a series of difficult moves rightwards to the base of a shallow hanging groove and heave up this to gain the lower-off on Unleashed.

11. Beat It (6b) The easiest route on the crag makes for a nice warm up, if done a few times. A steep start with a few long pulls takes you onto the slabby upper wall.