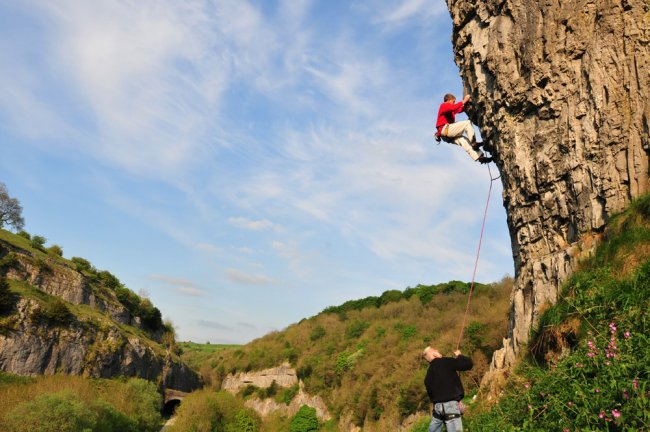 Gary Gibson on Never to Look Back. Photo Ian Parnell

There are many corners of Cheedale which, up until the mid Nineties, had remained neglected yet if tidied up would provide a very suitable venue for sport climbing.

Subsequent to the occasional new routes which had included the superbly photogenic Never to Look Back (7b) on the fringes of the area, Runyon’s Corner saw a complete overhaul in 1995 with a plethora of very worthwhile pitches up the blank-looking walls between the original and very vegetated routes of this dank area of the dale.

The result has been a complete transformation with the area of nettles and vegetation below the face replaced by a worn path trodden down by the numerous climbers that have visited this section of cliff. It is now well worth a visit.

This is best by scrambling up via a path from the railway track, starting just before the main bridge is crossed, and contouring below the wall. It is also possible to gain the cliff from Long Wall or a long downhill path from the Lifts and past Moving Buttress.

The cliff does take some seepage but with a cooling breeze dries relatively quickly in the spring. The face gets hardly any sunshine, except in the morning, and is not pleasant in humid weather when the midges are at their worst.