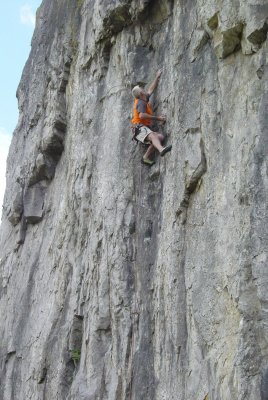 The history of this fine little cliff follows a slowly developing pattern over several years until Nadim Siddiqui and Jim Burton stumbled over the place in 1995 and introduced Gary Gibson to it: a month’s hard effort and the cliff was transformed from a minor sport venue into one of value with the rebolting of some existing routes and a handsome batch of other noteworthy additions.

The first climbers on the scene were Chris Jackson and Bob Conway who, using the minimalist bolting technique of the time, produced Stainsby Girls (7a+) and First Offence (7a) respectively. The following year Bill Wintrip, who had been active alongside Jackson and Conway, introduced Neil Foster to the cliff and produced a classic each, Wintrip with Lost Contact (7a+) and Foster with Can Boys (7a). Next on the scene in the early Nineties was Simon Lee for the magnificent Soggy Biscuits (7b+) after which everything lay quiet.

In 1995 a number of excellent face routes were discovered. Siddiqui picked the plum with Virtual Insanity (7b), Burton took Soft Centre (7a+) and Gibson mopped up notably with Reservoir Frogs (6c), When Reason Sleeps (7a+), Lies and Deception (7a) and Obelix (7b).

The main face overhangs ever so slightly and offers steep, sustained wall climbing mainly on features with the odd crack thrown in for good measure. To the right of the main face is a slabbier area with a trio of sport routes and to its left a series of pillars and faces with a handful of fine routes.

This is not a place to visit in the winter months due to its north-west facing nature and openness. Except for Soft Centre, the face takes very little seepage and dries relatively quickly. The sun catches the face around 5pm. so once again this makes it a very good evening or hot weather venue.