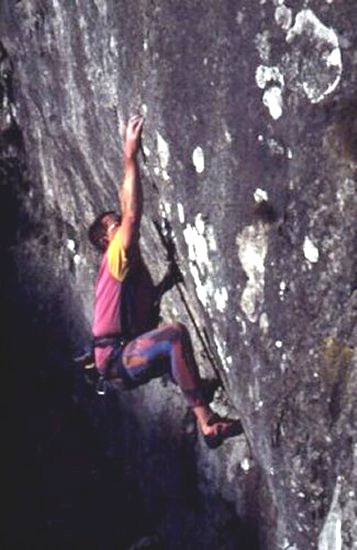 Gary Gibson on The English Impatient (7b), The Cove

The ambling dale of Deep Dale was somewhat ‘rediscovered during 1996/7 with a whole host of new routes added to a number of the excellent small faces scattered throughout the dale. For no apparent reason such faces as the Cove, the Secret Garden, the Thirst House Cave and Long Buttress had been left untouched and were ‘fair game’ for their sports-climbing potential. A number of pleasant routes have been added.

Each buttress offers completely different styles and is covered separately below:

A short steep buttress with a number of fingery problems which dry quickly and provide a perfect evening venue.

An impressive cave in the centre of the dale with only hard routes.

An old crag with trad routes now spattered with a mix of worthwhile sport routes. Morning sun only and very quick drying.

A great little find in the upper reaches of the dale. Face climbing with an evening aspect.

A trio of crags scattered throughout this pleasant dale located 4km out of Buxton. These are quite unusual since the dale is relatively unfrequented by climbers and walkers and gives a welcome alternative to the more popular cliffs across the road in Chee Dale. See Access below.

This dale has been acquired in recent times by the Derbyshire Wildlife Trust because of its outstanding natural value. It is a protected prime site of international importance. The Trust would prefer if there was no climbing here at all, but is initially prepared to accept very low levels of activity on established routes.

It is absolutely vital that if this concession is to be maintained that there is no damage to vegetation - this includes grasses, ferns, mosses and lichens besides more showy flowering plants.

Scree slopes are particularly vulnerable to disturbances and must always be left undisturbed as they host a special and fragile flora.

For the Cove follow the A6 for 4km south east out of Buxton. Park in the lower Topley car park alongside the river–opposite to the pay and display is best. From here a path runs alongside the quarry entrance, past some pools to arrive at the Cove in 5 minutes.

For the other cliffs the best approach is from the Old School House alongside the church in King Sterndale. This is easily reached via an offshoot of the road from the village of Cowdale. Park on the grass verge by the Old School House and cross a cattle grid before crossing two fields to a style on the edge of the dale. Descend directly into the dale (the Midshires Way) then walk up the valley past the Thirst House Cave (110m) for 300m to reach the Bear Wall on the left-hand side of the valley and the Secret Garden on the right. Ascend to each and access is via the terrace below.