There are two big quarries on the hillside and several smaller ones between the two. The right hand of the big quarries (SH 395 467) contains a few trad routes that are described in Lleyn climbing guides, which call the quarry Gyrn Ddu, presumably because it lies on the flank of Gyrn Ddu mountain. In web literature about the history of quarrying in the area the left hand quarry is called Tyddyn Hywel and the right hand one is called Tan y Graig. The names Gyrn Ddu or Tan y Graig are sometimes used to refer to all the quarries on this hillside but this seems to be incorrect and confusing. I use Tyddyn Hywel to refer to the left hand of the two bigger quarries.

Tyddyn Hywel Quarry (SH 399 471) is the left hand of the two main quarries on the slopes of Gyrn Ddu overlooking the A499 just east of Trefor. It has three levels. The middle level is the main attraction. It is an imposing face with overhangs and grooves on the left, a blank wall with two prominent back streaks just right of centre and slabs and grooves on the right. On the far right, a pillar runs the full height of the two lower levels.

The routes described here are the first recorded climbs although there is an unrecorded trad route on the bottom level (Pat Littlejohn, no further details). In addition, on the middle level, there are a couple of rust patches that were probably once pegs. I don’t know the history of these.

The quarry faces NW and is in the shade until mid-afternoon. Surface moisture dries on the first decent afternoon after light rain but after heavy rain there is seepage that generally needs an extra dry day to subside.

The approach up the hidden quarryman’s steps is unique and interesting and the main climbs are all of high quality. 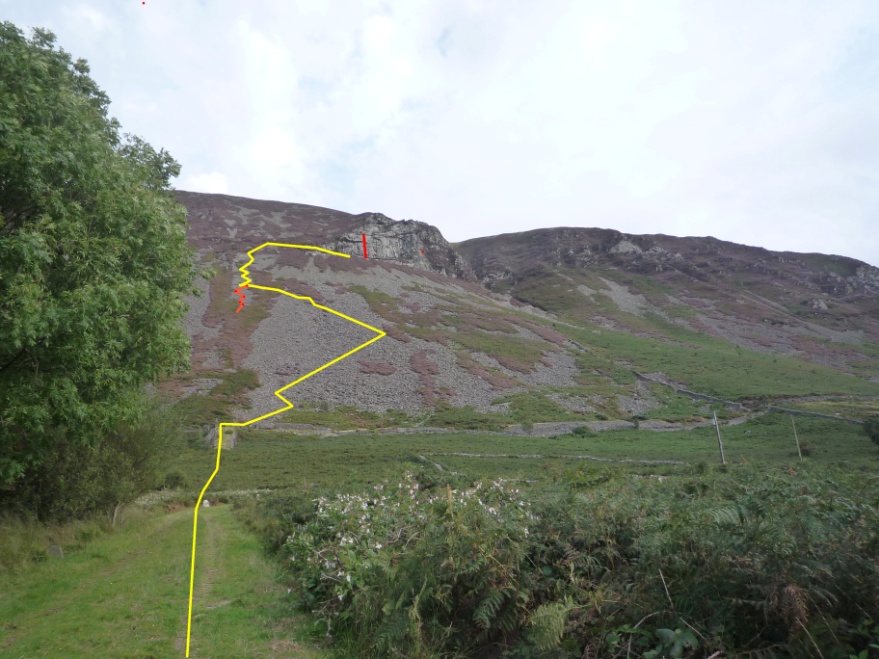 When approaching from Caernarfon on the A499, go past Clynnog Fawr and through the 40 mph zone at Gyrn Goch. After the speed restriction, the road crests a rise and curves gently right. On the left of the curve there is a bus stop then a short length of crash barrier. Turn left into a concealed entry immediately at the far (SW) end of the crash barrier and park to the left on the old road (SH 394 476).

Go through a gate and follow a lane towards the quarry. Carry straight on through a field (overgrown with bracken and himalayan balsam in summer) where the lane turns right. A short incline leads to a winding house embedded in the wall that bounds the open hillside. Carefully cross the wall/fence through the middle of the winding house, go right for 10 m then up diagonally right (bracken) to a relatively large rowan. At the rowan you pick up an amazing zig-zag line of old quarryman’s steps that lead up the big scree slope. It is invisible until you are on it. Follow the steps until they disappear at a small cairn then continue across scree and vegetation rising gently leftward (more small cairns) to reach a second line of steps that leads up the narrower, left-hand scree slope past a small rowan to the first level of the quarry.

The second level is gained by a short steep thrash up a heathery incline from the point of arrival on the first level. (30 to 40 min from the road). It is worth taking time to find the steps. They are an interesting feature and if you don’t find them the walk up is horrible. The first two photos should help you to find them.

In descent, another small rowan marks the top of the “short steep thrash” and the traverse that links the two sets of steps begins one zig-zag below the small rowan on the upper scree slope. Cairns marking the entry of the track through the vegetation can be seen with care. (The upper steps continue down the narrow scree slope to a yet another small rowan at its base but below that there is trackless vegetation and loose scree so it is better to make the traverse to the line of steps used in ascent).